Story shared by Daikon Vegan Sushi, a partner of the Very Veggie Movement: “Vegetarian food is no longer a niche, but a lifestyle chosen by more and more people. In our daily life, the inconvenience or restrictions for practicing vegetarianism is also minimizing.”

Mindy Lin’s family has resided in the United States for over 30 years, and thanks to her commitment and dynamic personality, she’s made a name for herself in the city of lights — Las Vegas. Her most well-known and loved dishes happen to be Japanese cuisine, but outside of work, she regularly seeks to expand her craft by visiting other restaurants, and gaining creative inspiration from television shows and other media.

It was around 2010 that Mindy Lin was invited to work in a sushi restaurant in Colorado. After moving, she enjoyed watching food-related documentaries on Netflix in her free time to get her creativity rolling. And as it happened, while searching through these colorful tiles, Mindy discovered several documentaries about animal husbandry and the food industry. Upon watching these and contemplating their message, a whole new perspective had been uncovered for Mindy.

“The cultivation of cows, pigs, chickens, and other animals is very inhumane. Moreover, the antibiotics and other additives injected in these food products will accumulate in our body as we consume them,” Mindy Lin explained, “not to mention their impact on the environment.”

Although Mindy has been involved in the food industry before, she, like a great many Americans, did not truly consider the source of the food that ends up on store shelves. When purchasing the foods one consumes on a daily basis, one might not always consider the inhumane treatment of the being it came from. But for Mindy and countless others, this question was soon ever-present in her mind.

In time, Mindy Lin absorbed many more documentaries of this type, including ones about marine ecology and the impact of overfishing. As a chef at a sushi restaurant at the time, all of this gave Mindy the incentive to try making vegetarian sushi.

Despite this newfound inspiration, running a restaurant is no easy task. Mindy has long yearned to run her own restaurant, yet was hesitant to indulge the thought of making that leap. However, Mindy gradually integrated vegetarianism into her own life — seeking to pick vegetarian options when dining out, for example — and now, she’s been a vegetarian for over two years.

After the COVID-19 pandemic began, Mindy recognized that her parents were getting older, and returned to Las Vegas to take care of them. Many restaurants and shops in the United States were severely affected, and could not operate normally. Mindy decided, however, that this would be the moment when she took her chance — and took a step closer toward achieving her dream.

Opening a vegetarian restaurant, let alone a vegetarian sushi spot, might have sounded like a risky move to some, but Mindy had made careful preparations, studying the vegetarian restaurants around the casino, and found that there was a very stable passenger flow and demand. Upon seeing the success of her soon-to-be neighbors, she was both relieved and emboldened.

Daikon Vegan Sushi officially opened in a residential area north of Las Vegas at the end of 2020 after planning for half a year. Aside from Mindy herself, she also hired two senior sushi chefs and a sophisticated and devoted team of servers.

Mindy said opening the restaurant in a residential area rather than in a zone closer to the Vegas Strip also guarantees the stability of the source of customers to a certain extent. Relying heavily on tourists will significantly affect the passenger flow under the pandemic, she said. But now, less than half a year after opening, Mindy has already established a regular customer base. Among her guests, some have been vegetarians for many years, and other visitors who are happy to enjoy both vegetarian and non-vegetarian diets have also become frequent patrons of the vegetarian sushi restaurant.

“For example, an entire family with only one daughter who is a vegetarian would come to our restaurant to tend to her eating habits. But the whole family found the meals delicious at the end, which made me feel very fulfilled!” Mindy recounted, deeply treasuring moments like these.

What makes Mindy’s vegetarian and vegan sushi special is her dedication to incorporating natural ingredients, like fresh fruits and vegetables, to make the taste, color, and other aspects, deliver a genuine alternative to the dishes they’re based on. Tuna, for example, is a popular choice at many sushi restaurants, characterized by its vibrant color flavor. In Mindy’s restaurant, the tuna bears these familiar qualities. Of course, unlike other restaurants, Mindy’s tuna is actually made with tomatoes. She shaves off the yummy pulp under the tomato skin through precise knife work and combines it with special seasonings to achieve the delightful dish.

Customers who have been vegetarians for many years may not care about the appearance of the food, but those who have just started to be vegetarian are still in the adaptation stage, so that careful handling would give them some familiarity with the food.

Once, a customer had happily run into the restaurant and greeted Mindy. “I only started to be a vegetarian yesterday,” he said excitedly. “I found your restaurant on the internet and came right away!”

“I couldn’t hold in my laughter,” said Mindy joyfully. “As soon as they went vegetarian, they came to me. This is a huge responsibility!” Mindy’s carefully cultivated menu did not disappoint this enthusiastic customer. Now, he has become a regular at Daikon Vegan Sushi and dines there every week.

Mindy developed every dish on the menu herself — a careful collection acquired from her own attempts to replicate her favorite non-vegetarian meals at home. For example, she once saw someone use jackfruit to imitate the shredded texture of pulled pork, and asked herself, “doesn’t imitation crab meat in California rolls have the same texture?” After some experimentation, Mindy’s vegetarian California rolls made with jackfruit, avocado, and cucumber, made a truly tasty addition to the menu. There’s also Mindy’s favorite lucky red roll, which uses jackfruit and tomatoes as well as a delicious spicy sauce to produce a remarkably rich flavor.

Like many chefs, Mindy enjoys the creative process a great deal. Even when she’s not in the kitchen, her mind constantly revolves around her creations. Just while heading out a few days ago, Mindy suddenly was struck with the idea of making a surf n’ turf using konjac to replicate shrimp and portobello mushroom as steak. Mindy was gearing up as she spoke about it, ready to return to the kitchen and experiment.

The two senior chefs hired by Daikon Vegan Sushi naturally have learned the traditional craftsmanship for fish sushi before. Still, they were often amazed by Mindy’s creativity, and exclaimed “You could even make this work?” upon marveling at her latest creation.

In addition to her constant quest for inspiration, the success of Mindy’s restaurant also lies in her pursuit of quality.

Mindy’s efforts alongside her team have indeed paid off. As the pandemic in the United States has gradually been brought under control and the ebb and flow of visitors at restaurants has begun to make a recovery, business at Daikon Vegan Sushi has become more prosperous.

“This is in line with my long-term plan, but it is still too early,” Mindy said. “To maintain a good brand requires hiring the most suitable people. My priority right now is to manage the flagship Daikon store well; then I will head towards spreading it across the States.”

Mindy’s connection with the Very Veggie Movement was as much of a coincidence as her chancing upon environmental protection documentaries before. Earlier in the year, Mindy met a Tzu Chi volunteer when she accompanied her mother to the park to exercise. After learning about the concepts behind Mindy’s restaurant, the Tzu Chi volunteer immediately introduced Mindy to the Very Veggie Movement and asked if she would be interested in joining.

This movement is good for animals, ourselves, and the environment.

Mindy was more than eager to participate in the Very Veggie Movement, and hopes the initiative can encourage more businesses to join, spread the word, and make delicious vegan and vegetarian alternatives more widely available.

“Vegetarian food is no longer a niche, but a lifestyle chosen by more and more people,” she said. “In our daily life, the inconvenience or restrictions for practicing vegetarianism is also minimizing.” She illustrated the dwindling gap by referencing how vegetarians and vegans now have mobile apps for dining out like HappyCow. This app allows individuals to find restaurants that suit their dietary habits. At the time, more and more restaurants, like Daikon Vegan Sushi, have been established. These positive developments have made vegetarianism and veganism easier and tastier to uphold, and the movement can only flourish from here. 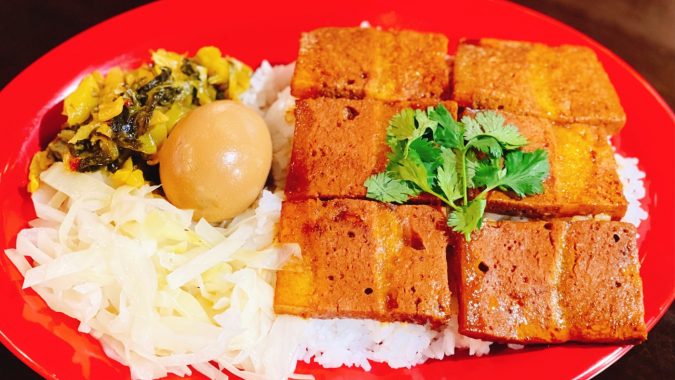 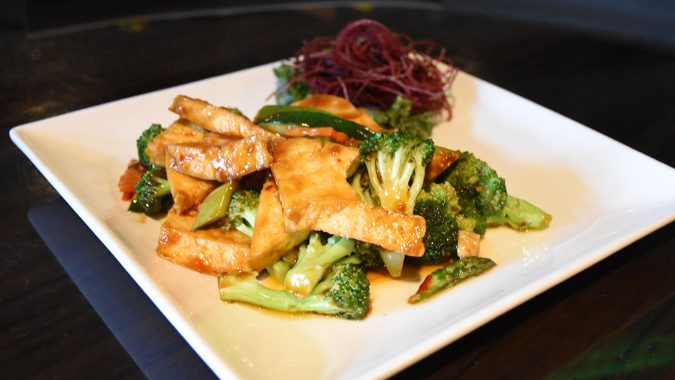 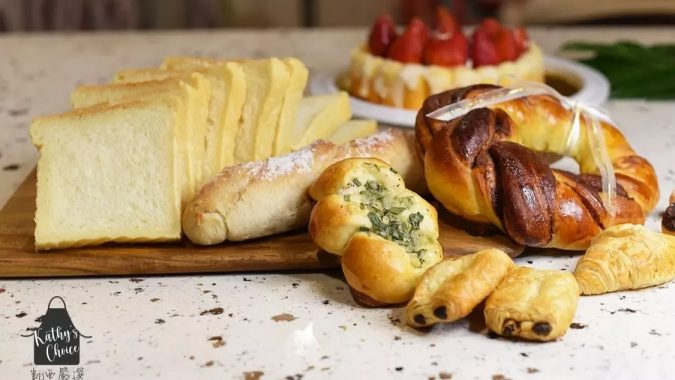 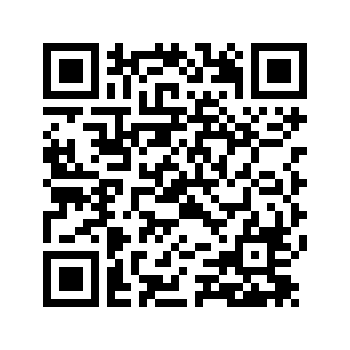